After struggling up Garnet Street, 15 members, including several who were new to the group, were met outside the synagogue by Scottish Jewish Archives Centre Director, Harvey Kaplan.  Harvey gave us a brief introduction to the building and to the history of the Jewish community in Glasgow before taking us into the archives which are held in the basement of the synagogue. 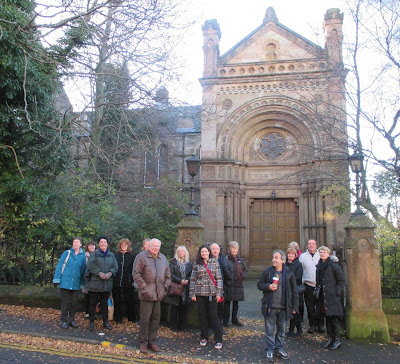 The SJAC was founded in 1987 and houses a small museum display, including a visual timeline of Jewish Scottish history, as well as a research facility.  The archives are open on Thursday and Friday mornings or by appointment, with Sunday afternoon open days once a month.

The group was first given a tour of the building and a chance to look around the main room of the synagogue. The building was designed by architect John McLeod and opened in 1879 as the first purpose-built synagogue in Scotland.  As the sun was shining brightly we were really able to appreciate the ornate Victorian interior and beautiful stained-glass windows.  Harvey explained that the founders of the synagogue employed the same skilled craftsmen as worked on other Glasgow buildings of the period and that the building reflects the wealthy status of the Jewish community at that time.

We were then taken back down into the research room where Harvey gave a detailed description of the records held by the SJAC with a particular focus on those of most interest to family historians.

The SJAC aims to document and illustrate the life of Jews throughout Scotland since the eighteenth century and collects a wide range of material.  These include synagogue minute books and registers of births, marriages, deaths, burials and circumcisions, some dating from the early 1800s.  Some of these records have been transcribed into a database which can be accessed at the centre and a catalogue is available (some collections are also included in the Scottish Archive Network catalogue). 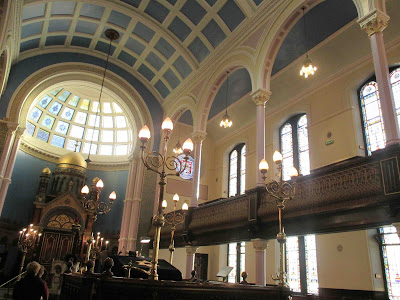 The SJAC has a collection of Jewish newspapers and directories as well as records of various clubs and societies, a large photographic collection and oral history recordings.  Many documents, including some original birth certificates, marriage agreements, papers relating to naturalisation and declarations of nationality made during the two world wars, have been donated by family members.  Harvey explained that these are particularly valuable as official copies do not always appear to survive and they may help to pinpoint a family’s place of origin when other records, such as censuses, are unhelpfully non-specific!

Harvey showed us some samples of the different types of material held by the archives, including some relating to his own family.  He described some of the centre’s recent acquisitions, in particular a collection of private family papers and memorabilia which document several generations of a German Jewish family and which may be of interest to family historians beyond Scotland.

We heard about the plans to open a Holocaust Study Centre as part of the SJAC, and some details of SGN member Michael Tobias’s ongoing project to document all the Jews in Scotland since the 18th century (a project with which several other members have also been involved).  This led to a discussion of some of the difficulties in identifying Jewish families in census returns and civil records, especially when name changes are involved.

After thanking Harvey for generously giving up his time to open the archives and for sharing his vast knowledge of the Scottish Jewish community, we finished off the day with a good lunch at a nearby restaurant, accompanied by plenty of chatter as we caught up with the latest news from the world of genealogy.

There will be no SGN meeting in late December due to the Christmas and New Year holidays.  The next meeting will be in Edinburgh on Saturday 26th January, details to be confirmed.  If you work in the genealogy industry in Scotland, you are very welcome to join us!  Please email scotsgenenet @gmail.com for further details or to be added to the mailing list.
Posted by Scottish Genealogy Network at 22:05