We started our visit at 158-164 King Street, the premises of Aberdeen and North East Scotland Family History Society (www.anesfhs.org), one of the oldest family history societies in Scotland, established in the early 1970s. Upon our arrival we were greeted by Margie Mellis and taken on a tour of the library facilities on the ground floor. After about twenty minutes of standing there with our mouths wide open and drooling, we soon recovered - what a superb facility! The library is packed with resources, some available online, but most not - these include copies of journals from every family history society in Scotland (and beyond), unique and extremely rare history and family history publications for the society's area of geographical coverage, but also for Scotland, and by the looks of it, much of the known universe. 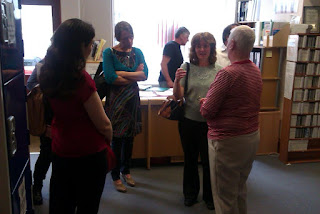 We were then shown the 'behind-the-scenes' part of the society's operation, where orders are processed (they sell a seriously substantial range of useful books and materials), followed by an overview of the ground floor offerings in the premises, with Anne Park demonstrating a useful World War One database she has been busy working on for some time. After making some purchases from the bookshop, it was time to move on, but a seriously huge thank you to the society for accommodating our request for a visit, and for showing us such a superb example of what a family history society can achieve, as well as a deeply impressive research centre.

After a bite to eat it was onto the next phase of our visit, this time to Aberdeenshire Archives (www.aberdeencity.gov.uk/education_learning/local_history/archives/loc_archiveshomepage.asp), and a tour of the facility at Old Aberdeen House (which deals with Aberdeenshire, as opposed to the Town House, which covers Aberdeen City). We were greeted by none other than archivist Ruaraidh Wishart, who some may know from his recent appearance in the Annie Lennox edition of Who Do You Think You Are. We started our visit with a behind the scenes look at the archive's storage facility, where Ruaraidh discussed the way in which the records for city and county were separated between the two buildings (and why), some of the more unusual records, and the importance of keeping the archive assistant happy in daily work! Some materials from the archive have recently been digitised at the National Records of Scotland in Edinburgh, such as the poor law records - at present these can only be accessed at the facility, but it is hoped they will go online in due course. We also visited an upstairs storage room where we were shown some episcopal records (Aberdeenshire was strongly episcopal, so lots of BMDs are missing for the area on ScotlandsPeople), as well as some unusual record types we were not so familiar with - such as a series of education censuses from the area taken between 1874-1913 to work out which children were not being educated. Again, a big thank you to the archive team for giving up some of their time to share their treasures with us, but also to give us a better understanding of how it works as an archive, and many of the issues it has to deal with on a daily basis.

We had a quick drink after in a pub in the city centre, and then made our respective journeys home, a little wiser than we were at the start of the day, and buzzing with enthusiasm! Final thanks goes to our member Lorraine Stewart for facilitating the visits with the two bodies on our behalf.

The next visit of the SGN will be to Dumfriesshire Archives on Saturday 27th July 2013. If you work as a professional genealogist and want to come along, you will be more than welcome - contact us at scotsgenenet @gmail.com for details, and we'll hopefully see you there!
Posted by Scottish Genealogy Network at 16:46 1 comment: