The Scottish Genealogy Network held its first ever Continuous Professional Development day yesterday (Saturday) at the University of Stirling campus at the Bridge of Allan. Eighteen attendees, mainly working genealogists (ranging from those just starting to the more experienced), though also from other associated disciplines were there, in what turned out to be a fascinating day long programme that not only educated, but also highlighted gaps in our knowledge which can be further addressed at subsequent events.

Marie Dougan had kindly arranged the proceedings, and after her brief intro, Chris Paton gave the first talk, looking at the law and practice behind the formal inheritance of land in the old Scottish feudal system. We often hear that land was confirmed to an heir through the Services of Heirs process or precepts of clare constat, but there was quite a bit more to it - how did the process happen, what might complicate an inheritance (e.g. debts or burdens on the deceased's estate), the differences between heritage and conquest, and some lesser known ways by which land could be inherited - some involving legal trickery!

This was followed by Buzzy Garden's fascinating discussion on how to retrieve genealogical clues from sewn Scottish samplers created by young schoolgirls in classes from the 18th century onwards. Buzzy showed us how such samplers had a structure, what certain attributes represented, e.g. black letters meaning the initials of the deceased, or the order of precedence for family members on a sampler, clues that indicate a sampler is indeed Scottish, and more.

Kirsty Wilkinson then gave an overview of what is often termed "heir hunting", as well as tips on how to trace living descendants. The differences between the law in Scotland and England were explained, and recent changes in some of the tools relied on by those chasing probate or confirmation cases were outlined. Kirsty also explained the practices of engaging in probate research, such as the various ways by which a professional genie might be employed, the differences between heir hunting and 'conventional' genealogy, and more. 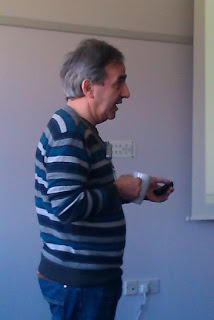 After a coffee break, Michael Tobias gave us an overview of Jewish genealogy research - some of the different documentary materials generated by the Jewish communities (such as ketubot), additional problems such as the fact that most Jewish families adopted surnames in the last two centuries only and the impact of the Holocaust on the community. He further expored various projects in existence to help people with research, including DNA research - but also unique problems such as the inadequacy of conventional Soundex for use within Jewish based databases, and more.

Chris Halliday then provided a case study describing a connection to Traquair House, which underwent some unexpected and fascinating developments after some lateral thought was applied to a particular brick wall problem, one that ended up with a high profile media splash in the Scottish press and a very happy and delighted client and archive. Chris also informed us that he has been appointed to a new post as a family history officer at Highland Archives - a huge congratulations to Chris (and we'll all be up for a party soon!)! Chris also confirmed that Highland is hoping to be able to offer access to the ScotlandsPeople Centre computer system in due course (Ayrshire Archives is also shortly about to locate four terminals in Ayr offering the same facility).

After lunch it was time to start talking to each other. In three rotating groups by way of make-up, we discussed three key subject areas to examine our current practices, to offer experiences from our individual perspectives, and to explore new options in practice. The areas discussed were marketing, becoming a professional genealogist (and best practice), and the use of social media.

Marie Dougan gave a talk on her recent experience at Rootstech, and discussed FamilySearch's plans to develop the conference further next year. She also highlighted the differences in approach between Rootstech and Who Do You Think You Are Live event in London, and the various messages - all different - being conveyed in Utah at the event by the key genealogical online vendors and players in data supply and management.

The last 15 minutes led to some forward planning by the group on activities we would like to pursue for the rest of the year in terms of visits and activities, followed by a quick update from Chris Paton on the archives access conference he attended the two days previously in Dundee, and some changes coming soon, including a proposed new catalogue facility facility for Scottish archives currently at the Heritage Lottery Fund proposal stage, with the proposal from The Scottish Council on Archives. Everybody who attended left the event with the desire to see more of the same in due course, with another event now being posited for October. Drinkies at a suitable hostelry in Bridge of Allan completed the day - a situation one member found particularly odd, having previously attended the same building many years ago as a child at school!

The Scottish Genealogy Network is about Scotland's professional genealogists pushing themselves to be better at what we do, to not be complacent about what we already know, to share best practice, and to create a community of like-minded folk who believe that the best way to achieve such goals is to just go for it. After our first CPD day, we can definitely say we have arrived and are fulfilling the need our members have identified - and we've only just begun!

Roll on October...!
Posted by Scottish Genealogy Network at 11:57 4 comments: